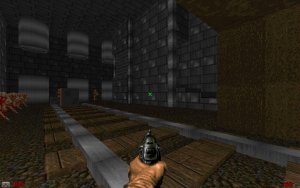 The rails from Zort04, showing the much more techno and realistic environment

Finished on 17th June, 1999, Zort04 is a stand out from all of the other Zort wads, as it is the only one which is a techbase/realistic styled map, rather than castles and dungeons. Using no new resources other than "Devil's Disco" by Kniggit for the music, we are presented with a Half-Life styled scenario, where we must escape from an underground complex, but first we must turn on two power flows to activate a computer to let us out.

The gameplay style is similar to previous Zort wads, however, and the scripting is still a major part of the development.